Reactions to the Brunei-Muara Metro Service

Last month, it was announced that there would an overhaul to the current bus system in Brunei. With the topic of public transport on our minds, we decided to revisit our earlier post from December, where we created a map for an imaginary Brunei-Muara Metro Service. In this post, we share the responses we received and collected across Facebook, Twitter and Instagram, and of course comments right here on Open Brunei.

We fully intended to encourage discussion and to gather reactions, whether favourable or critical – honestly, we didn’t hear enough criticism! These were popular topics:

While these are all important points, we decided to share some other interesting categories of responses that were not as immediately obvious.

Some commenters were of the opinion that an MRT-type system isn’t necessary at all, if the current bus services could be improved instead. (This author personally agrees!)

those routes are the same as our bus system. I think it is better to improve the current bus system than having an LRT/MRT – @oxba, Twitter

beforehand we want the bus to be extremely punctual and a lot of em! – Ili AR, Hazirah’s Timeline, Facebook (1)

Others thought that it would be advantageous for the current bus system to exist concurrently with the metro system.

As there is not that many stops for this MRT/LRT system, i don’t believe many people are willing to walk far distances from their home. With a bus system they can use a bus to go to those stops. – WafiyM, comment on Open Brunei

bus services need to work hand in hand with the metro service [including] servicing the ‘less-serviced’ areas – Adzimin, comment on Open Brunei by  Son of Groucho

It was pointed out that other travellers such as pedestrians, and of course car owners, would also need to be catered for.

I really think that a lot more pavements and bridges need to be built if we’re really gonna let people walk. – Adzimin, comment on Open Brunei

Comfort and Availability of Facilities by  x-ray delta one

A question that would naturally arise when considering a metro service in Brunei is: “Why aren’t more locals using the current bus system anyway?”

Many comments were made regarding the attitudes of Bruneians towards cars, as well as their lifestyle choices.

Some commenters added that comfort is important to potential users of public transport:

Sure one only has to pay BND$1 per journey but thanks to the quality of the bus-smelly environment, vandalized seats-, no wonder not so many Bruneians utilize the public transport. – A. M., WAWASAN BRUNEI 2035 (Group), Facebook

Thats how they attracts people to use public transportation if the infrastructures are good, clean and welcoming – Melvin Lai, WAWASAN BRUNEI 2035 (Group), Facebook (1)

Fadley points out the difficulty of getting a hold of the bus routes and schedules:

About the purple buses, why locals inda berapa [aren’t keen]. I think its also because of the scheduling, apart from the sorry condition. Maybe if there is a proper schedule available freely dapan mata, like on the bus stop itself, I will be willing to ditch my car. – Fadley Madoff, WAWASAN BRUNEI 2035 (Group), Facebook (1) What are the practical considerations that need to be made if we were to build a metro service in Brunei-Muara?

Teah pondered upon whether the metro service would run underground or overground:

It made me wonder what the best system is for Brunei in order to have this, whether it is an underground system or overground. Just thinking about the Airport highway made me realise how inconvenient this would be if it is overground because the residential areas are very close to the roads. – Teah Abdullah, comment on Open Brunei

She also added, on Twitter: “I lived next to a busy bus route in Singapore for 5 months, which consequently was also when I developed insomnia. :(“

It was pointed out that stops should be built near highly-visited or highly-populated areas in Brunei, and that implementation could be carried out in phases:

start with the most populated areas first (Berakas, Lambak, Serusop, Gadong, Qlap) and continue to make more stops the more they are used. – WafiyM, comment on Open Brunei

prolly we could just highlight, that most MRT system can either or should be as near to the spotlight areas which are either shopping malls or school/institution and landmarks – Ili AR, Hazirah’s Timeline, Facebook (2)

Ili continued to point out that Brunei’s rainforests need to be preserved:

A big circle cannot be applied here as we still have major forests unless we plan to go sightseeing n the middle of the jungle..(I.e bukit ladan forest reserve, passing through labi). hence for starters, a straight line is practical,for now. – Ili AR, Hazirah’s Timeline, Facebook (2)

People gave their thoughts on the stops and routes we had chosen for the map:

only one stop for Jalan Menteri Besar? The map needs to take into account where people live, where people work and where people want to go. – Alexander Bounty, WAWASAN BRUNEI 2035 (Group), Facebook

I would add one line that cuts through the middle (maybe from Jerudong straight to Gadong then Airport and finally straight to Muara) to give people a quick express alternative route to those places. Although I guess you could argue that Brunei-Muara is small so I think people wouldn’t mind going through the interchanges anyway….unless it’s time terima [pay day] or something – trylobyte, comment on Open Brunei

trylobyte further obliged our request to suggest stops in the Tutong district:

As for my home district Tutong… I think the main Lines would be a stop at Pekan Tutong and then an interchange for the ‘Merimbun Line’ that goes south to Tasek Merimbun – good for tourist. The Merimbun Line would have few stops along the way. Another potential stop would be at the Penanjong Garrison but I’m not sure if you can make a stop at a military base. Bukit Beruang? It’s a residential area and there’s the district’s only sixth form school school there – could be a place to put a station maybe? Other places: Keriam? Danau? – trylobyte, comment on Open Brunei

There was a suggestion for connecting, we presume, a high-speed train to popular spots in our neighbouring Malaysia.

Alexander gives reasons on why connecting to Malaysia, or any other country, would be a difficult feat.

as much as we would like it, cross-border trains are pretty hard to justify and the legal paperwork would be huge. It’s only possible in Europe because of agreements like the Shengen Agreement and the freedom of travel in the EU Constitution. – Alexander Bounty, WAWASAN BRUNEI 2035 (Group), Facebook

In the original article, we asked people to disregard feasibility and cost-effectiveness. One of the reasons for this was that we believed that saying “This is not possible in Brunei” tends to block further discussion, especially interesting discussion.

Thanks to everyone who responded and shared. We especially appreciate those who took the time to type up their comments here on Open Brunei.

Have you ever asked your children, siblings, nephews or nieces what they think about buses and trains?

I asked my younger siblings to comment. Here is what they said:

+–Brother, 12 years old
He wouldn’t mind using a metro system to get to school.

He also showed concern for pizza delivery men, who have previously gotten lost finding their way to our house (ahem). He suggested that, instead of motorcycles, they could use a metro service. With the stops and names of locations available, it would be easier for them to reach the correct locations in Brunei.

+–Sister, 8 years old
Taking the cue from her brother (and possibly misunderstanding the idea), she suggested a “pizza train”. This can mean any number of things, so she illustrated her idea. Unfortunately, her drawing has been lost, so we can only share her later refinement of the idea, a pizza plane. It’s probably irrelevant to this topic, but kind of fun: 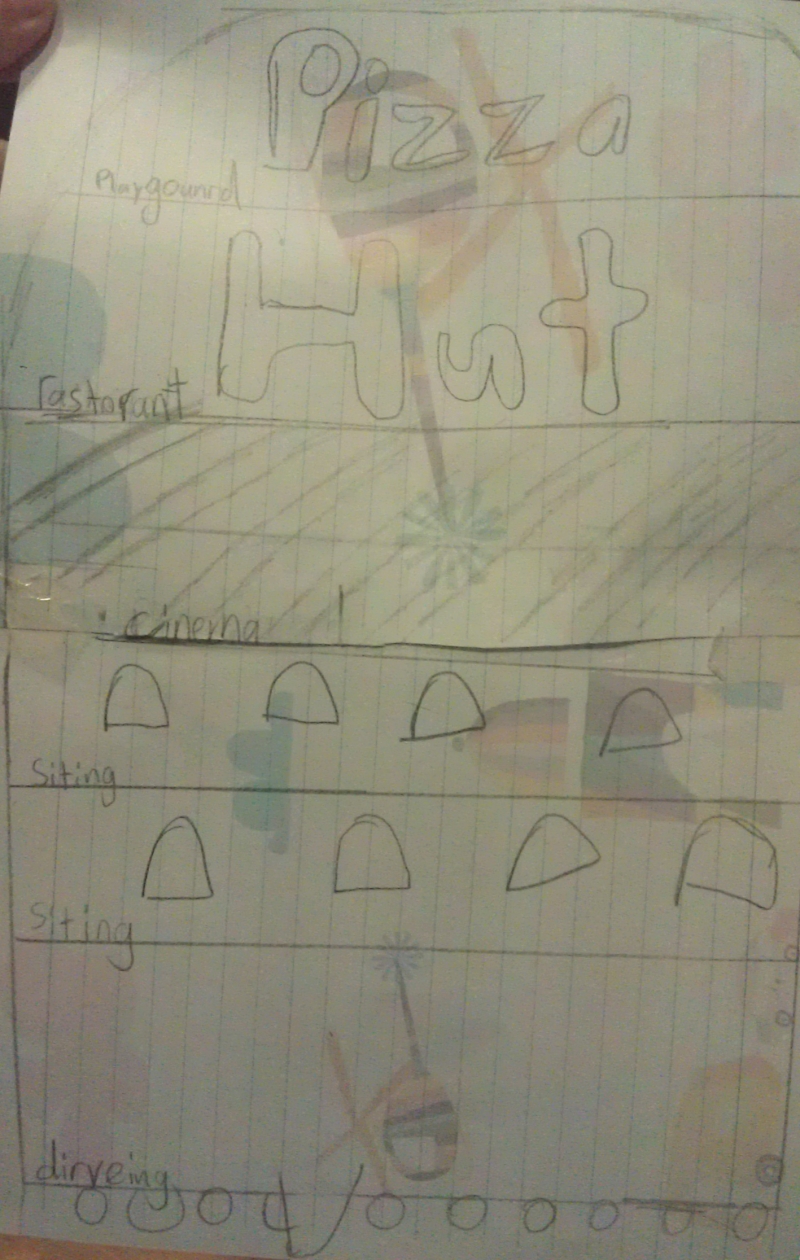 Here are the topics we brought up in this post:

Have you spoken to your children or younger siblings about public transport? We are also missing reactions from the older generation. Please feel free to share any interesting insights from them! 🙂

Did we miss any other major reactions?