The metro routes were first created on Google Maps. The lines focused on the Brunei-Muara district and was created by following major roads, and also going through shopping or recreational areas. View the final map here.

After working out the typical routes, which was created arbitrarily with no statistical or qualitative basis, we took into account residential areas such as Mata-Mata or Manggis. We considered how people would get to work or school, or go from their houses to public places for food or recreation.

As mentioned under “Populations” in our main article Brunei-Muara Metro Service: A Proposal, it was only much later that we ‘analysed’ the residential populations near each station. We realised that some areas were left out despite their sizable residential populations. (Read the section on “Station Names” below for more info.) However, we believe that the residents could be served by a complementary transport system, such as buses, shuttle boats, or bicycles. 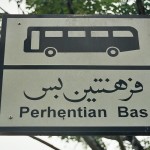 Without getting into specifics, car usage is a concern to Brunei due to: effects to the environment, energy use, traffic conditions, spending habits of Bruneians, investment on road infrastructure and road safety, and among others issues. The Government is aware of the challenges.